It’s September 2054 in Chicago, more than a year after the Spiritbane incident. We are a team of medics and security personnel for a DocWagon High Threat Response (HTR) unit that patrols the streets and rescues clients.

We spend the end of our shift at DocWagon sitting around the station and talking.  Thumper shares that his family has a restaurant nearby and invites us all for dinner and drinks, including Mari.

We go to the restaurant and meet his wife and daughter.  Some sewer rat gangers come in and start pushing around his daughter and other customers.  Thumper goes and and speaks gently to them, at which time they decide to leave.

The next day we spend most of a boring shift just riding around in the ambulance.  However towards the end of the shift we get a call about a car accident with gunfire.  We pull up and a green car with gangers has crashed into a silver coupe that has our patient and four others.  We pile out of the car and the gangers seem like they are threatening the car.  Ryoshi quickly shoots off the side mirror of their car and the gangers all hit the dirt.  There are also two shadowrunners there, Scales and Edge, who say the green car rammed into the silver one and they are there to help.

The runners stay out of our way as we move in to stabilize the patient.  Just then the window of the building next to the scene explodes as a desk come flying out of it…followed by two grenades.  Everyone dives for cover.  Thumper and Espadas dive on top of the victim and his friend.  Dr, Hyun and Icebox are stunned and knocked flat. 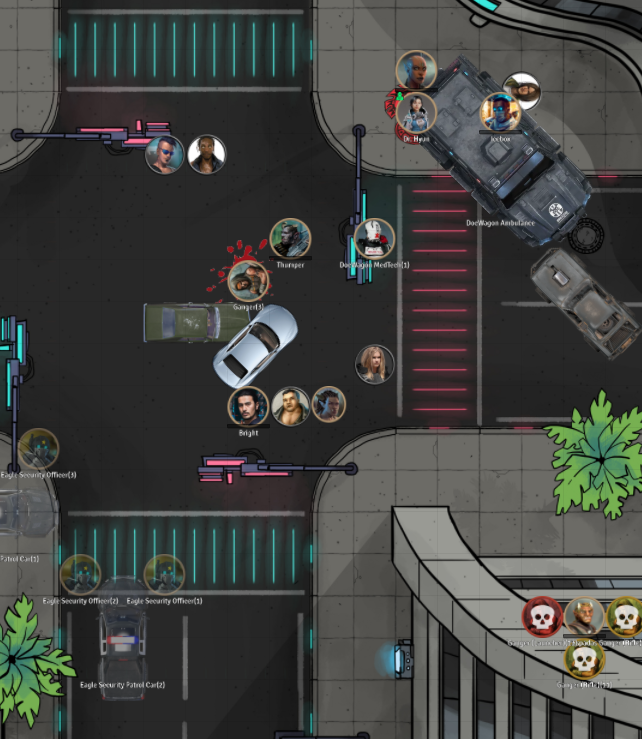 Espadas runs and vaults off the desk up into the open window.  He hits and kills one of the 3 guys there with his vibrosword, effectively cutting him in half.  The rest of the team starts to move the patient to the ambulance.  Ryoshi drops another ganger in the window, and Espadas slices the last one.

Just then another truck crashed into the intersection.  The team is able to get the victim in the ambulance, along with Dr. Hyun who is still stunned from the grenade.  One of the gangers shoots at Bright as he is moving back, but Ryoshi shoots the ganger.  Thumper drops a ganger and Scales drops another ganger.  Dr. Hyun finally gets up and is able to get in the ambulance.  Scales waves at us to indicate danger and shoots at the truck.  We start getting the other people into the ambulance, but the panel of the truck pops open and a ganger pops out.  He shoots a missile launcher that catches our med tech, two of the victims, and Icebox.  The medtech is down.

Bright pulls out his SMG and drops the guy with the missile launcher.  Another jumps out but Thumper drops him.  Two more gangers pop out from the van and shoot at Thumper, but miss.  Ryoshi kills one of them. 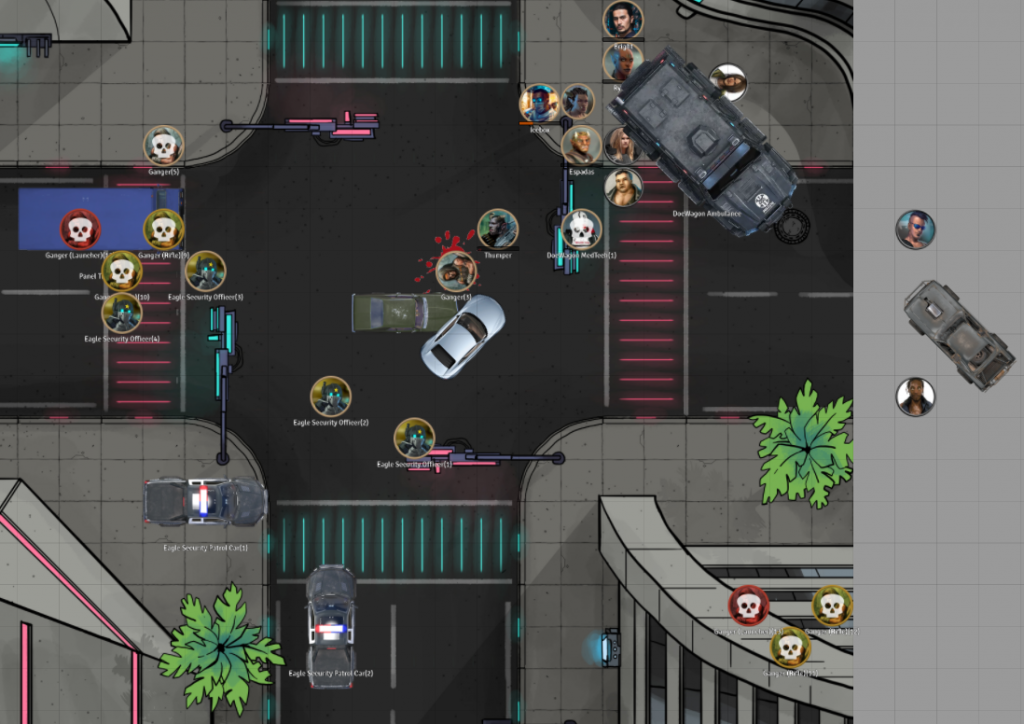 Eagle Security shows up and the last ganger cowers against his car.  We get the rest of the people in the ambulance.  The last ganger shoots at Thumper but Ryoshi drops him.

The original victim who called us in is Locus Pendleton.  Icebox recognizes him as the son of a Corp from Shiawase.  Locus is a well known celeb partier, and we recognize his girlfriend as well.

Eagle Security contacts DocWagon and lets them know that the danger has passed, and they are investigating what happened.

The next day, Dr. Hyun is reassigned to a post at the hospital across the street as the director of the ER department. As a result, Isaac “Icebox” is now the team lead on the ambulance and will have two med-techs under him.